Pastor Garland Harvey, Jr. is officially the lead Pastor at Nankin Community and Polk United Methodist churches as of July 1, 2020.  We welcome Pastor JR and his family to our area.

From Pastor JR: I was born December 29th, 1965 in Mansfield, OH and attended Madison schools. Upon graduation I entered into the United States Air Force. I was stationed at Davis-Monthan AFB in Tucson, Arizona. Completing my initial tour, I joined the Arizona Air Guard where I was a full-time technician. I left Arizona in 1992 and moved to Lacrosse, Wisconsin. I attended classes full time at the University of Wisconsin-Lacrosse and in 1996 decided to move back to Ohio. I gained employment at the Ohio Air National Guard and remained employed there until my retirement in July of 2017. I began ministry in 2015 as the pastor of Tiro UMC and upon my retirement, began at Shelby 1st UMC as pastor there.

My wife of 6 years is Jennifer Harvey and between the two of us we have five children: Gabriel, Kaitlin, Ashley, Kevin, and Graeme, between the ages of 16-21. Jen is a longtime employee of Shelby City Schools where she is currently an intervention specialist. We have two children who are still in school and both will be attending Pioneer, in Shelby. Ashley will be beginning at Capital university in the fall of this year. Gabriel and Kaitlin are both graduated and living in the local area. We currently live outside of Shelby on a small six-acre farm where we have three dogs, two cats, bees. and a small number of ducks

I have many varied interests. First and foremost, I am a husband and a father, that, in of itself, is involved. Other activities I enjoy would be running, bee keeping, gardening, up-cycling (turning trash into treasure), and making lamps. This is by no means an all-inclusive list, but you get the idea.

My view on ministry is that it needs to be approached as a servant. A pastor is charged with being the spiritual leader of the church. I agree with that view. However, far too often, I have seen where the word “leader” is misconstrued, or twisted, into meaning the pastor tells people how they should think, act, or even in some cases vote. I see this as an abomination. When I am performing ministry, everything that I am doing should be done with a servant’s heart. If I am to lead with a servant’s heart, that means setting my own ego and agendas aside and focusing on the people whom I am serving. I am not in charge. In ministry, my two watch words, or benchmarks, are love and empowerment. Every action that I take, I need to ask myself: is this loving. Am I meeting people where they are, or am I expecting them to respond to some preconceived notion that I may have? Am I empowering a person on their faith journey to be who they can become? Or, am I purposely holding someone back because their ideas, faith, or gifts are better than my own and my ego and pride is wounded? An empowered church runs itself. My job as a servant is to preach the Gospels and love the people. Carrie joined us in September, 2012 as our woman-of-all-trades. She earned her degree in Instrumental Music Education from Ashland University, and works at Wal-Mart Pharmacy in Ashland as lead pharmacy technician. She is married to Jeremy Roland, who is also employed by Wal-Mart in Ashland.  Jeremy has recently discerned a call to ministry and has recently become a credentialed pastor with the Assemblies of God. Jeremy and Carrie have one son, David. Diane has been a member of the Nankin congregation for more than 30 years. She was a first grade teacher in her former life, and now she loves teaching Sunday School and directing the Nankin Choir. If you press her, you might find that she’ll sing a solo, or at least a duet! Diane is also co-chair of the Congregational Care committee, along with Carol Crossen. 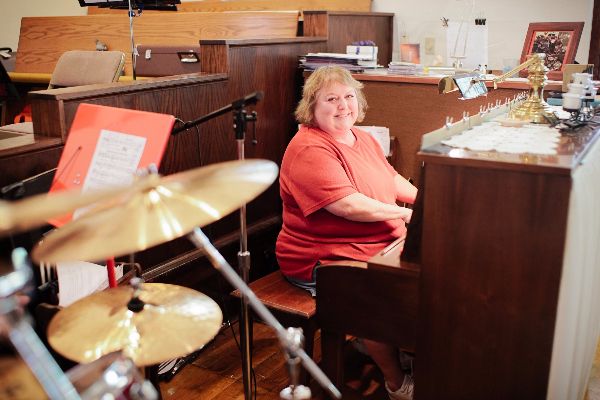 Nancy leads us in our morning worship as our pianist.  She received her musical training at Bowling Green State University, earned her master’s degree in education at Ashland University, and taught elementary music in the Loudonville School.  As of July 2013, Nancy is now also the church pianist and keyboard player.  Thank you to Nancy for sharing her great love of music with our congregation! Other Staff not pictured: